One order will include a study looking at causes of the deficit by examining unpaid duties and foreign trade abuses.

Administration officials said Beijing was not the focus, but China is the largest source of the US trade deficit.

The orders will also seek to combat dumping by foreign countries, which is considered a form of trade cheating.

The president is expected to sign the orders on Friday,

“These actions are designed to let the world know that this is a president taking another step to fulfil his campaign promise,” Mr Ross said.

Mr Trump spent a large part of his presidential campaign railing against the US trade deficit and foreign trade deals.

Mr Ross will lead a comprehensive review accounting for the sources of the $502.3bn trade deficit and report back to the White House after 90 days.

The study will look at whether cheating, trade deals, lax enforcement and World Trade Organization rules play a role in the deficit, according to Mr Ross. 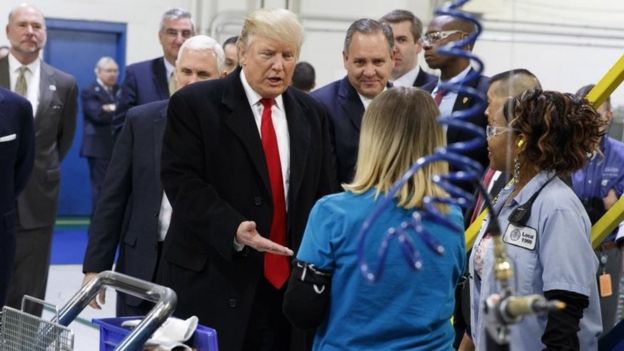 The orders also will focus on stricter enforcement of the US anti-dumping laws and countervailing duties, or the penalties imposed on foreign governments who violate trade rules, as well as pirated and counterfeited intellectual property owned by US companies.

The pair of orders are expected a week before Mr Trump meets the Chinese president at his Mar-a-Lago estate in Florida.

Mr Navarro insisted the orders had nothing to do with Mr Xi’s visit, but the US’s highest trade deficit is with China at $347bn a year.

Mr Trump tweeted on Thursday night that his first meeting with Mr Xi would “be a very difficult one in that we can no longer have massive trade deficits…and job losses”.

“American companies must be prepared to look at other alternatives,”

The half trillion-dollar deficit slightly increased from 2015, according to the Commerce Department.

The trade gap reached a record level since 2012 last year, though the imbalance remains below its previous high in 2006.