Some targets were missed, but after a decade-long slump growth is finally returning to Pakistan’s economy. Much of the growth has come from a spurt in services, and a partial rebound in agriculture. A boom in consumption has swelled imports while exports continue to sag. The survey paints a mixed picture.

Exemptions to independent power producers (IPPs) are no longer mentioned in Economic Survey 2016-17. The reasons for removal of this figure from the exemption list are unclear, but the removal resulted in Rs50bn no longer being reported as exemptions.

Sources in the IPPs expressed surprise when told of this removal, while tax officials were not available for comment. Since 1994, the IPPs have enjoyed income tax exemptions on their profits.

The customs exemptions surged to Rs151.7bn in 2016-17 from Rs120bn in the preceding year, an increase of 26.4pc. The bulk of the increase was because of increase in cost of concession under the fifth schedule, which reached to Rs63bn in 2016-17 as against Rs30.6bn a year ago.

Another increase in exemptions came on account of free trade agreements (FTAs), especially with China that Pakistan signed in 2006 and other duty exemptions. FTAs with Malaysia and Sri Lanka also witnessed growth in terms of tax exemption cost.

No exemption cost was reported on trade with Iran while in the case of Economic Cooperation Org­anisation countries the cost of exemption dropped to Rs73m in 2016-17 from Rs247m, a decline of 70pc.

A huge benefit of Rs12bn in rationalisation of corporate tax rates has been extended, which is 87pc of the total income tax exemption value for the year 2016-17.

The rest of the exemptions are shared by relief on education exp­enses, tax credit for expansion in existing industries, new industries, and sales to registered taxpayers.

Capital gains exemption worth Rs1.7bn has also been removed from the survey for 2016-17.

An SRO is an executive order granting special tax treatment for an individual, industry or sector. It is usually issued on the directive of the finance minister, the cabinet’s Economic Coordination Committee or on Federal Board of Revenue’s proposal. 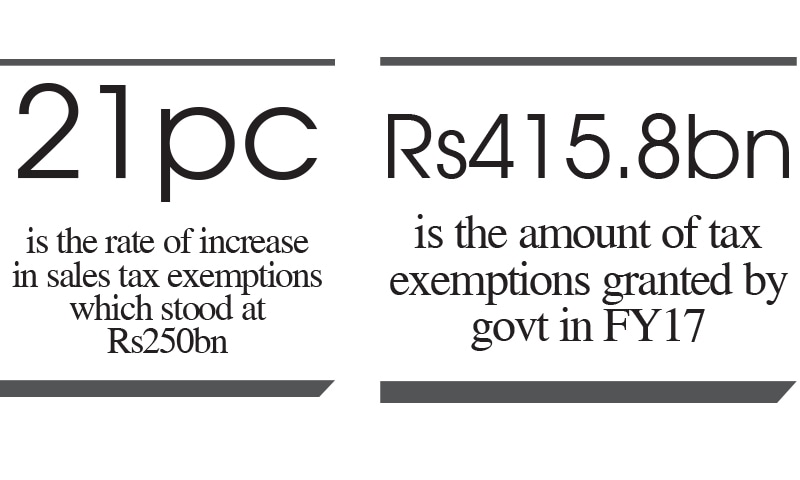 Exemptions on the import and local supply of items placed under the sixth schedule of the Sales Tax Act have been recorded at Rs156.9bn this year as against Rs128.9bn last year.

The sixth schedule is a list of exempted products, mostly consumer items.

The cost of exemption on the import of products under Eighth schedule stood at Rs16.4bn this year as against Rs11.4bn last year. The schedule applies to items imported under specified conditions.

The government started a three-year programme to phase out exemptions given through SROs in fiscal year 2013-14 as part of an IMF programme. Economic Survey 2012-13 reported the figure of total exemptions at Rs239.5bn. In the first year of its rule, the PML-N government took this figure to Rs477.1 billion in fiscal 2013-14.

In its second year (2014-15), exemptions worth Rs105bn given through SROs were withdrawn. In the subsequent two phases, a similar amount of withdrawal was announced in budget speeches.

If the government had eliminated those SROs, the reduction would have reflected in the FY17 economic survey. Instead the survey released last night reflects an increase, in spite of not reporting the exemptions granted to the IPPs.